Our Mission is to Unite the Tribes; that is to cultivate global spiritual unity whilst retaining and celebrating our glorious diversity.

1GOD.com is a platform designed with a twofold purpose:

Combating the negative impact these ideas can have is only possible if people are willing to accept that their ideas about God (or even someone’s rejection of God) may not equal the reality of God.

We’ll say that again; to truly acknowledge the sovereignty of God is to accept that God is bigger than any one religion; even yours, even ours. It then becomes possible to focus on what unites us and makes us all brothers and sisters.

This is the what 1GOD.com is all about.

We are building a new kind of platform where people like you have the opportunity to connect with others who share the belief that God is one.

We want to spread the idea that there is only one ultimate truth (God).

All of our many traditions, doctrines, and philosophies can be no more than flawed attempts to understand what is so incredibly far beyond our comprehension.

The central, unifying message of 1GOD.com is in our name; 1 GOD. We submit that there is one universal, transcendent, immanent(philosophy, metaphysics, theology, of a deity) existing within and throughout the mind and the world; dwelling within and throughout all things, all time, etc.. deity underlying all of creation and that human religions, philosophies and spiritualities are all imperfect attempts to understand and approach something so incomprehensible.

Around the world, there are those who feel that what they believe about God is the undeniable, absolute truth, while everyone else is wrong and doomed to death and destruction.

-They are discouraged by their religious “leaders” from thinking for themselves and forming their own opinions about faith.

-They may believe that they have a monopoly on God’s power by virtue of what they believe.

-They may even be so convinced that their ideas are right that they may be willing to resort to violence to get their point across.

This unfortunate phenomenon is known as “fundamentalism” and it poses a real threat to peace, prosperity, and stability in today’s world. This way of thinking is not limited to religion; be it religious or materialistic, (ie, Atheism), either way it’s an extreme position.

It is not confined to a single country, culture, philosophy, or religion, but wherever it grows, it clouds the hearts and minds of those who embrace it.

No matter what form it takes, there is no “fun” in fundamentalism.
We believe it has to end…

Another “philosophy” which seriously impedes the process of unifying religions under one God is that of relativism.

At its simplest, relativism is the idea that points-of-view, morality, value judgments, beauty, and most notably, TRUTH, are non-valid concepts.

Relativists suggest that truth is a subjective phenomenon which is only valid for the people or culture that holds it.

Under this way of thinking, different things may be right or true for different people at different times. Ultimately, “truth” only exists as it relates to the individual.

Why is this a problem?

Mainly because it is terribly difficult for society to function if everyone goes around doing what is right in his/her own eyes.

What if we were unable to punish those who commit even the most heinous crimes because someone believes that what they have done is perfectly acceptable?

It’s not much of a stretch to imagine how bad/worse society could get if everyone on Earth was allowed to measure right and wrong using their own “yardstick.”

Giving equal value to every viewpoint is akin to printing your own money-  truth and morality become diluted and the value of this ‘currency’ is increasingly cheapened.

At 1GOD.com we view atheism in all of its flavours as a failure to be able to separate God from religion.

If we were to imagine God as a celebrity, the religions and philosophies throughout the world would become his fan clubs. Atheists attack God based on the actions and opinions of his fan clubs, not on the perfect, eternal, changeless character of his true nature. 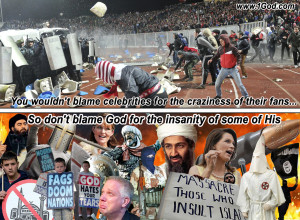 We see this as a real danger.

Just as our understanding and image of the physical universe has evolved as we discover more and more about its nature, our understanding of the nature of God must evolve and grow as well. Science may be doing a service to humanity by cleansing institutionalised religion of its misconceptions, but neo-atheism is making the deliberate mistake of literally throwing the baby out with the bath water.

Looking For A Simple Explanation?